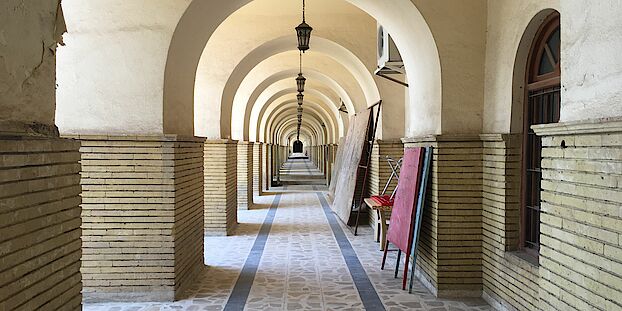 In this article, SNSF Eccellenza Prof. Dr. Aline Schlaepfer from the program in Near and Middle Eastern studies offers an insight into the research project “Ottoman Afterlife” and introduces her team.

For the past few years, I have been interested in the transitional period from the end of the Ottoman Empire in Arabic speaking provinces and the state-formation period after 1920, in particular in the trajectories of men and women who lived parts of their adult life during the two periods. In 2020, I co-edited a special issue entitled Ghosts of Empire: Persistence and Claims of Ottomanity(ies) in Post-Ottoman Spaces in the Revue des mondes musulmans et de la Méditerannée. In it, my colleagues and I explored various forms of continuities in – or reappropriations of – social, political, literary, and historiographical practices inherited from the Ottoman period.

In line with these questions, I wanted to explore the liminal point between continuity and memory, on a larger scale. Memory studies in the humanities, social and neurosciences, have taught us that memories are not only traces from the past, but can also serve as privileged insights into contemporary social and learning contexts. Who remembers – or forgets – what, why, where and when? In this research project, the question is thus not only what remains of the Ottoman period, but also how and why is the Ottoman era remembered. In Iraq, Jordan, Lebanon and Palestine, various nationalist and colonial historical discourses have attempted to erase the overall Ottoman imprint on modern politics, culture, diplomacy, and education after the collapse of the Empire. But what about contesting voices emerging outside of official spheres to oppose, nuance, or offer alternative perspectives on the Ottoman period in order to challenge national and colonial narratives of erasure? By asking these questions, the five-year collective research project Ottoman Afterlifeaims at renewing our approach to the history of the modern Arab Middle East as we know it today, by looking at it through the lens of (counter-)memory production.

The team is composed of four people, Jasmine Benhaida, Fares Damien, Dr. Falestin Naïli, and myself. In her doctoral research which brought her to Jordan for a field research of several months this year, Jasmine Benhaida focuses on a former legal Ottoman institution, the Sharia Courts of the city of Al-Salt which continued to exist after the imperial collapse. Her research provides a rich insight into the social life of women, their spatial mobility, financial claims, and strategies of representation. In his research based on several field trips to Lebanon, Fares Damien is interested in the formation of South Lebanon (in particular the area of Jabal ‘Amel) in the early 20th century, during the transitional period from the Ottoman Empire to the Lebanese Republic. Based on written and oral sources, his research aims at better understanding layers of belonging and identity formation, in relation to space, territory, and border-formation with Palestine. Dr. Falestin Naïli is a social historian specializing in late Ottoman and Mandate Palestine and Jordan. She has focused much of her recent research on local governance and politics in transitional times, in particular around the emergence of modern municipalities in the late 19th century, in the cities of Jerusalem and Amman. In my own research, I am interested in history-writing about the Ottoman period in Iraq. By looking at the writings, research and institutional habits of several generations of historians since the 1920s, I intend to rethink the notion of neo-Ottomanism, often reduced to a conservative-Islamist interpretation of history glorifying the Ottoman Muslim past for the purpose of spreading contemporary Turkish imperialism. Archival and field research has already brought members of the team to Jordan, Lebanon, France, the UK, and the USA, and will further bring us to Turkey, Iraq and Palestine.